Bitcoin (BTC) has seen its value return to the $32,000 range after a three-day low in the cryptocurrency market. Since its all-time high of $69K, BTC has lost over 52% of its value.

However, instead of this moment being one of despair, for the Head of Research of Grupo 2TM, André Franco, Investors need to be aware of market metrics to act wisely and not driven by fear.

“If we were totally price agnostic, I would say that bitcoin metrics have never been so positive. Long-term investors (LTH) continue to accumulate bitcoin and we are at the highest and most positive point in history for this metric, as you can see below” , highlighted.

Bitcoin balance in the hands of long-term investors Source: Glassnode

According to Franco, another metric that goes in the same direction is the balance of bitcoins that haven’t moved for a year or more, which already exceeds the 65% mark and is also at its highest point in history. 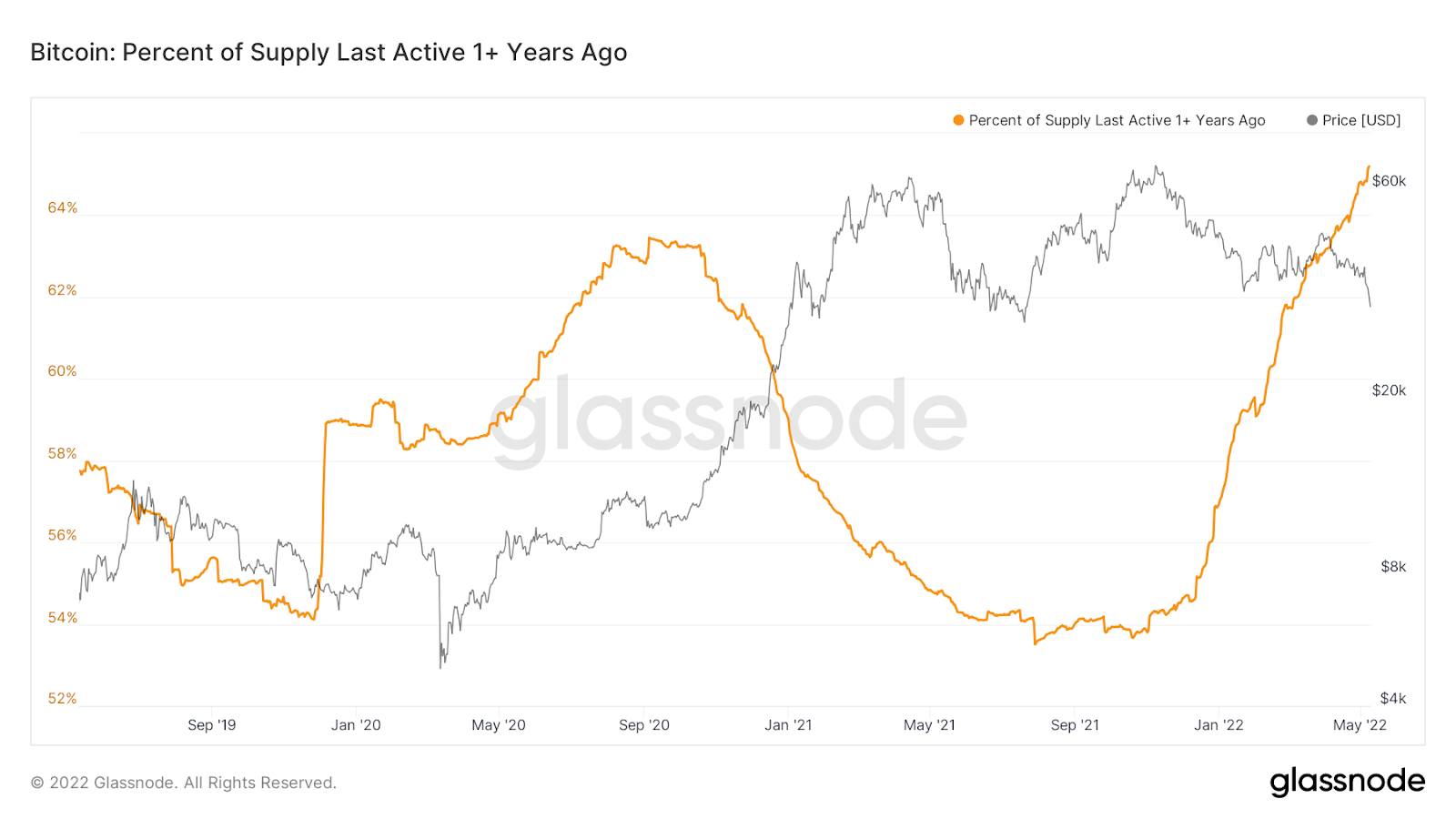 “As I said, if we didn’t have such a negative macro scenario, I would say that soon we would see bitcoin rise again. However, the flight of risk assets (risk off) can still cause more drops in bitcoin and, consequently, in the entire market crypto. So I still see that we can see bitcoin below $30,000,” he pointed out.

Franco also highlights that to know ‘how far will Bitcoin fall’, there are 3 metrics that are very good for showing signs of euphoria and capitulation, according to him, they were very useful to measure the moments of exhaustion and also the capitulation of the 2017/2018 cycle.

Three metrics to know where the end of the fall is

The first of them, according to him, is the unrealized net profit/loss (NUPL). This metric measures the ratio of unmoved bitcoins that are at a profit to those that are at a loss, since their last move. This metric shows extreme euphoria when it reaches values ​​above 0.75 (blue band) and capitulation when it is below 0 (red band). 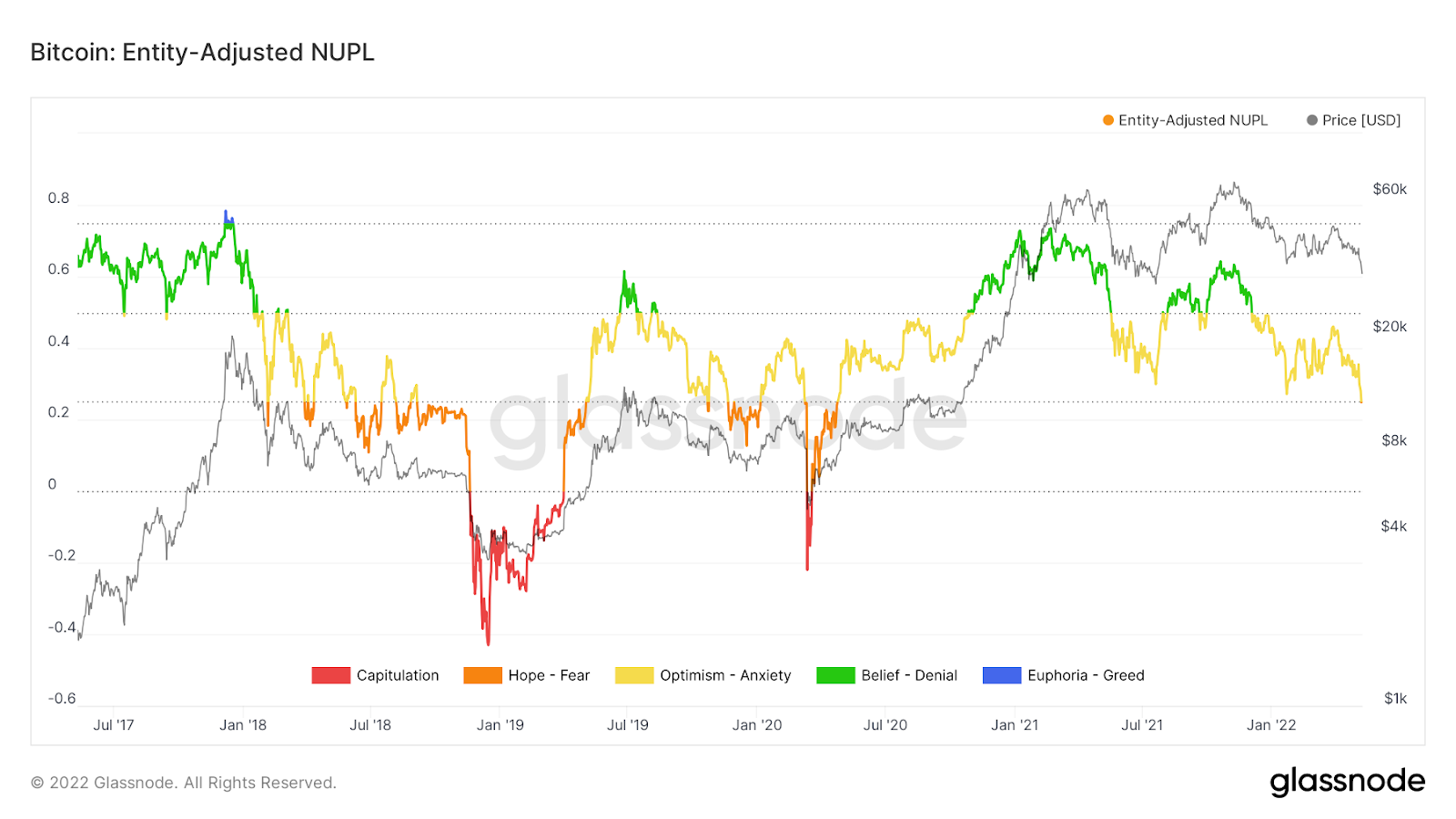 “As of this writing, we are at NUPL values ​​close to 0.25, which fits into the fear/hope zone. Consequently, if the current cycle proves to be like past cycles, we will still see the continuation of the fall to the capitulation zone (below 0) to be reached,” he said. 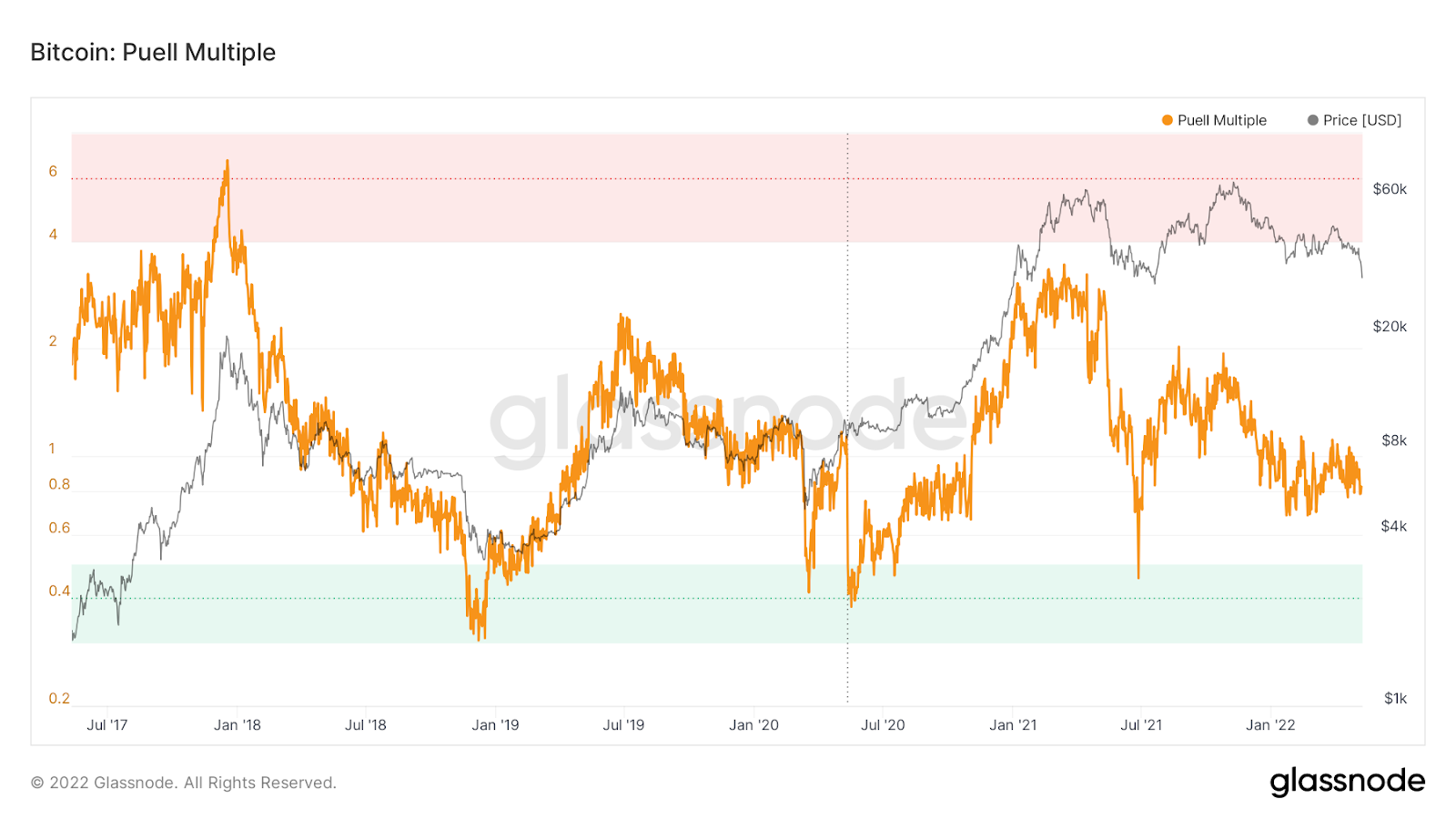 “When the metric value reaches values ​​above 4, we reach the euphoria zone and when it drops below 0.45, we enter the capitulation zone. Because it is a metric that takes into account the mining industry, these moments of capitulation in the Puell multiple, they are accompanied by a drop in the hashrate as well, as we can see the “noisy” purple line of the bitcoin hashrate value below” 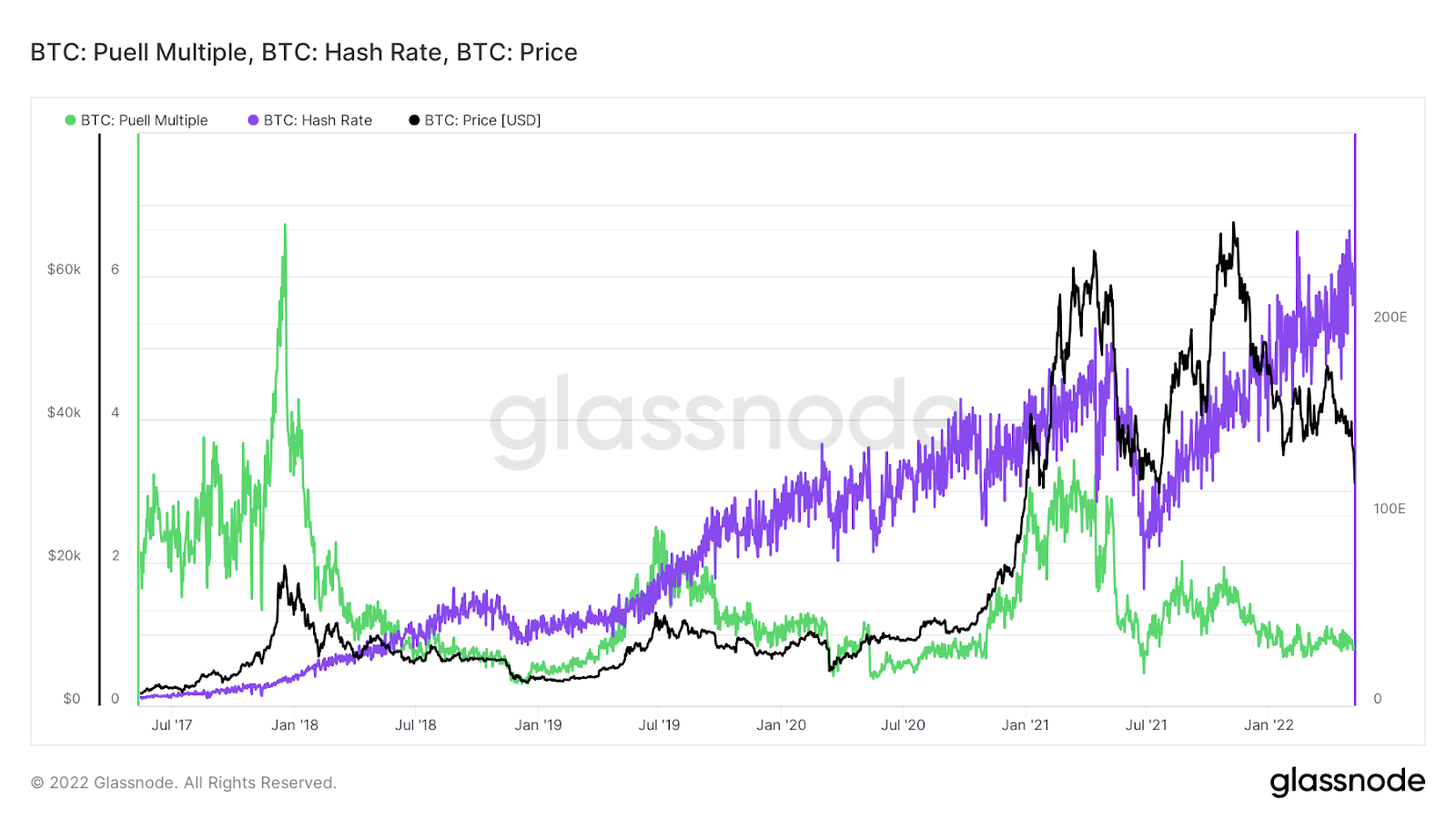 “Last but not least, the percentage of bitcoins in profit is also a great indicator of capitulation. The zone below 50% has proved to be a great buy zone in past cycles, as we can see below”, he points out. 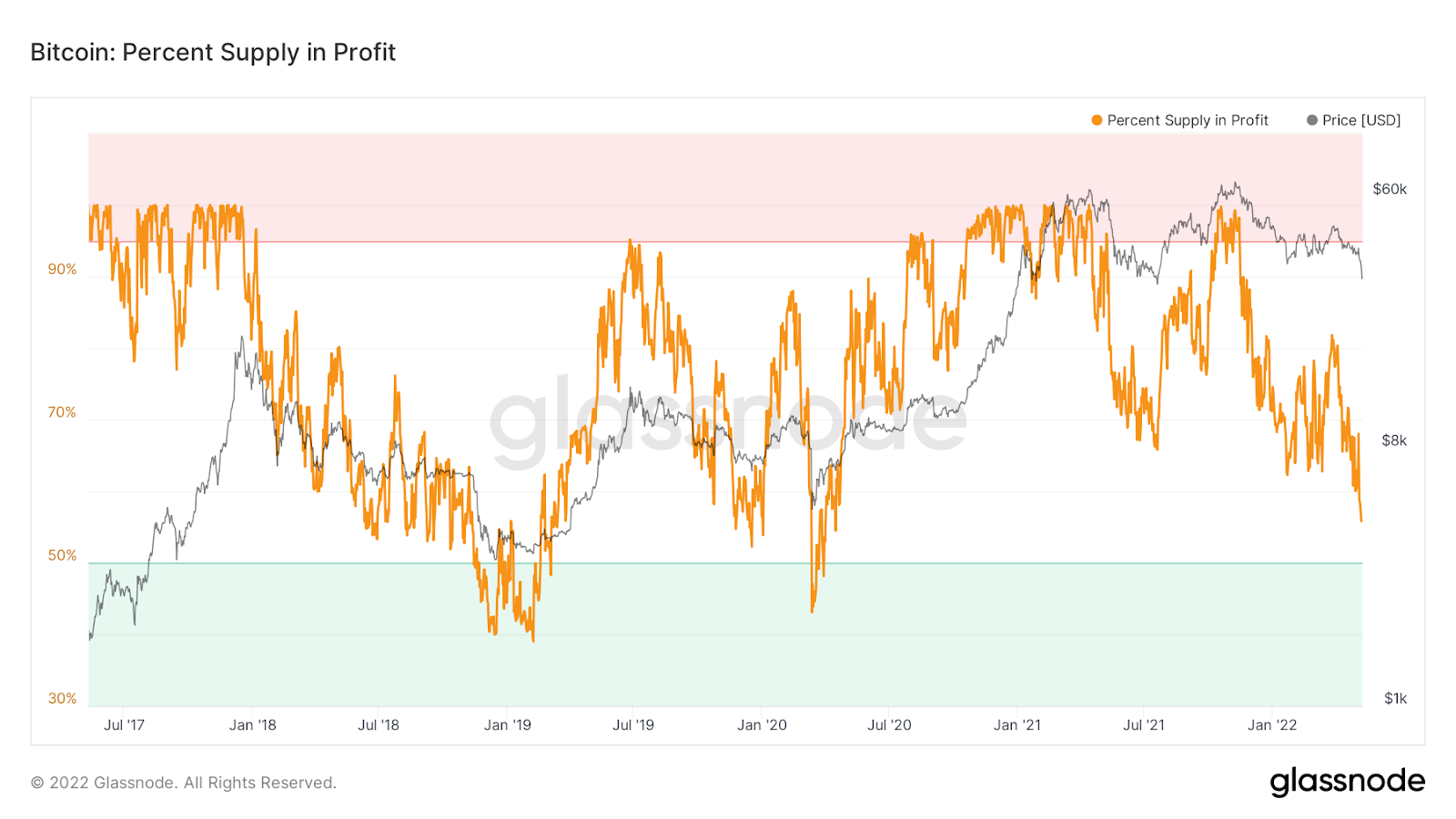 “If bitcoin repeats the previous cycles, we may still see lower prices before the reversal. These metrics presented can guide us in the current market moment and also make us understand what is the best time to turn the hand and get back to being optimistic with the market. market. However, they should not be followed as if they were rules in stone”, concludes Franco

Trader and analyst Jessica Doosan also agrees with Franco and points out that the recent drop in Bitcoin’s value may be a little more lasting than the previous ones, however, according to her, it is when the market falls that traders will buy them. to ‘concrete’ the classic market jargon “Buy low and sell high”.

“When the market scenario improves, you can profit by holding good long-term investments. At the moment, the market is not doing well and we may find it difficult to hold for a long period of time, but whoever buys low and sells high is makes a profit and not those who buy at high to sell at an even higher high”, he said.

In light of this, she pointed out 6 cryptocurrencies that she bought during this recent market downturn as she believes they have grounds to overcome the recent dip and start a bullish move soon.

The first cryptocurrency on Doosan’s list is XCAD Network (XCAD) which has dropped by more than 20% recently.

“I think getting xcad at that price is a fantastic deal. We can easily get returns that range from 10% to 20%,” he said.

In second place she points to Thetan Arena, which has also seen its phallus melt recently but, according to the analyst, still has the potential to rise from 10% to 25%. In third position it points to Wilder World (WILD)

“Last time Wilder World was among my nominations it was at $1.80 it rose to $2.60. It is now trading at $1.55 so again we have a great opportunity to get one more entry I’m telling you this again and again. When you record profit, the market is still not stable. If you were paid $1.80 and you didn’t record profit as soon as $2.50 came in, you just saw the profit and not registered. Now again we are getting an incredible opportunity and at the same time a lower price as the WILD will go back to $2,” he pointed out.

The analyst is also buying Moonriver (MOVR), which according to her, is a cryptocurrency to keep in the long term as the project is very promising.

“Even if the market situation gets worse, you can still hold on to it. This project can perform very well in 2-3 years. Still, do scalping for now. You can easily make a profit of up to 20%” , he said.

In fifth place is Energy Web Toke (EWT) which, according to the analyst, is a cryptocurrency that has kept its price stable since it dropped to $2 and, therefore, should soon resume its bullish cycle.

“I believe that if their team releases an update, this token can provide a % profit from here. The riskiest coin of all the coins above. If you enter, treat it like a lottery.”