Polestar, a 4-door grand tourer to the 2022 Goodwood Festival of Speed Polestar 5Participated with the prototype of . The company shared new information about the powertrain of the model it plans to launch in 2024.

According to the information given, Polestar 5 will have a new powertrain, which is under development in Sweden. of this system 800 volts It is stated that it will have an architecture and a rear electric motor that offers high power. Combined with the front electric motor 650 kW (872 HP) power and 900Nm It is aimed to produce impressive values ​​such as torque.

When we look at the prototype brought to the festival, we notice that the camouflage has been reduced and the transition to production has been gradually made. However, it is striking that there is still no transition to real lighting at the front and rear. Because we know that in the production version, split LED headlights, defined as ‘Thor’s hammer’, and LED taillights extending from the rear will be used. You can review the patent images in the gallery to get an idea of ​​how the Polestar 5 will look in its final form.

The Polestar 5 will use an aluminum chassis that the company developed specifically for this model. In this chassis, which is used in some supercars today, aluminum plates and extrusions are adhered to each other with super strong adhesive. This results in an extremely light and robust structure. When it comes to an electric car like the Polestar 5, weight is also very important for the greatest possible driving range.

In addition to the aforementioned 4-door GT model, Polestar will also showcase the Polestar 3 and Polestar 4 SUV models. All these models will be launched in the next 3 years. 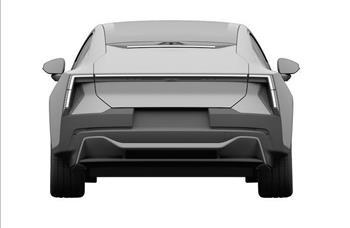